Unfortunately I cannot write at length today, so I will just suggest two more  novels set among professors and post-grad students: The British Museum is falling down(1965)  and Small World, both by David Lodge (1985). I think they are his best works, and the most enjoyable metafiction I have ever read.  Small world is a carousel of academics travelling around the world (the subtitle is An academic romance), with a protagonist by the  name of Persse (Perceval) falling in love with an Angelica. It weaves  the romance and  19th century fiction with its revelations and sudden turns. Long, but it reads fast. 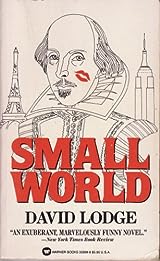 The British museum is falling down instead is a short novel,  written in twelve chapters to follow the pattern of Joyce’s Ulysses; like in Small World  the protagonist is a young post-grad student, this time by the name of Adam, who travels around London one day, worrying that his wife Barbara may be pregnant again (the two are Catholics and do not use contraception). The last chapter is told from Barbara’s point of view , with  an interior monologue that is luckily much shorter and less convoluted than Molly Bloom’s in Joyce’s novel. Every chapter imitates one modern novelist, from Franz Kafka to Graham Greene.