I have finally finished this  post on my 2018 reads.  You will find links to previous  posts  on some of them.

There are no poetry books listed this time- I have read poetry, I do that all the time (my husband sends me email with poems attached at least twice a week, among other things) but I haven’t read any collections.

As I think I’ve already said somewhere else, I don’t usually see myself as a reader of crime stories, but then I  read some almost every year. In 2018 I actually read nine detective  or other crime-related stories out of twenty works of fiction.

All the Italian Fiction I picked had to do with crime, although with different approaches:

The novella Una storia semplice (A simple story) by Leonardo Sciascia, a classic meditation on the interaction between Sicilian society and Mafia.

Two novels by Andrea Camilleri, both from the Montalbano series: Il metodo Catalanotti (the Catalanotti method) and L’altro capo del filo (On the other end of the phone). The latter , which I read twice in a row, has perfect balance between the emotional exploration of characters and social analysis. The Montalbano series has never disappointed me, so far, and the protagonist, Commissario salvo Montalbano, has never stopped evolving. 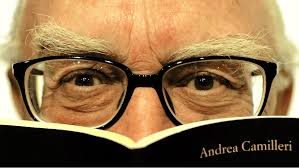 There were a few crime stories  in the  English and American fiction  I read:

A traitor to memory, by the American Elizabeth George, from the Lynley Mysteries series. As I said in an unfinished post, it was good, but not as good as other titles featuring Thomas Lynley: all the usual elements are there, but it is clumsy and the multiple narrative voices are too many. Beautiful language, as usual: George is one of those writers who choose to sound absolutely British, being actually American.

Lethal White, by Robert Galbraith (JKRowling). The fourth  Cormoran Strike novel, every bit as good as its  predecessors. I’ll have to write about this detective series. The development of the characters continues to be credible, the recurring elements (Strike’s physical and monetary problems, Robin’s relationship with Matthew) do not become obvious or repetitive), the exploration of  the upper classes sounds believable, or so it seems to me, although I am not upperclass nor British.

The different narrative focuses work well, and so do the changes in tone and narrative pace, something that was already remarkable in the Harry Potter novels.

And talking of Harry Potter, the only incursions into the realms of fantasy fiction last year were the second and third  books in the series, The Chamber of secrets and The prisoner of Azkaban.  I found them as good as every other time I had read them, and, as usual, there were things I had forgotten which  pleased me very much, like Harry’s prophetic dream of an apparition in a wood at night in Azkaban and the dwarves Gilderoy Lockhart hires as Cupids for Valentine day in The Chamber of Secrets.

On secon thoughts, we could actually count  The good man Jesus and the scoundrel Christ by Philip Pullman as fantasy: after all,  miracles and apparitions can be interpreted as magic, which is why the gospel have that name: they tell the magic worked by God, God’s spell.  The novel appeared in the Canongate Myths series.

The next three titles were the best fiction written in English I read last year; each had its post:

The collection The purple swamp hen and other stories by Penelope Lively was the only short fiction I read – I’m afraid I am one for long, even VERY long fiction, the longer the better (if it is good). I actually read the stories in the off-moments during exams – that’s the good point of short fiction, you can put it aside or pick it up depending on what you’ve got to do. The eponymous story is great – ironical, sometimes cruel, it describes the lives of Roman patricians and their slaves at a villa in or near Pompei, just a few days before mount Vesuvius showed its true colours for the first time since civilisation had reached it. Making a hen (however purple) the narrator, and having her declare her species’s superiority all the time is a stroke of genius, especially as the hen sounds at ease in a post modern attitude, putting together fiction and taxonomy, talking to us from far away in time. The other stories are not so brilliant, but some are very good, especially two stories which border on the supernatural: Who do you think you were and DIY (Do it yourself), which may leave you sad. Some instead are open attempts at creating 21st century Austenesque fiction, but there can only be  one Jane Austen, everyone else tends to be boring when they tell tales of engagements and social occasions. I have to confess sometimes I find the original Miss Jane not such fun.  And this is last summer post on Lively’s stories

Other fiction (In Italian translations, except for Knausgaard’s novel which I read in English):

A time for everything, by Karl Ove Knausgaard is a Norwegian novel which I decided to read in English. A very unusual piece of fiction, which one could call fantasy considering it has angels and demons. It is difficult to say what it is about, unless we say it is about human beings with their difficulties, disillusionments, fears and fixations. Most of the novel is about episodes from the Bible, but the characters are not how you’ll remember them from Sunday school: Cain is good, but paranoid about other people’s judging him. Abel is charismatic but cruel. Noah is an albino and in all the hours of seclusion from light he thinks and thinks. Angels are blood drinkers. The early sections and the end are about Antinous Bellori, who in the sixteenth century will devote his life to the study of angels after seeing two of them in a deep forest at night. The biblical episodes are told in  dyschronic sequence, you need some pages to understand whether you have moved back in time, or if you have jumped ahead.  The final pages take us to Scandinavia today and are  fascinating similar to Boyhood Island, Knausgaard’s novel about his childhood.

It is a magnificent novel, although it  feels like a chore sometimes, being a very slow read. The description of the world when it was young (which looks a lot like Norway, lush, solemn  and solitary) is moving, lyrical, sometimes breath-taking. The most memorable episode is utterly heart-breaking, but that isn’t for the book’s literary quality: we read of the flood that the biblical god sends to punish people for displeasing him, and you see, while you read, the waters rising, groups of villagers going up the mountains and finally being submerged while Noah pretends not to see any of them from his ark. We may end up like that, at some point, only it won’t be a wrathful god who’ll have caused that.

Triste, solitario y final, by Osvaldo Soriano, which I read in Italian.   It is  a post-modern delight told with    incredible narrative skill. Very, very good. My post on Soriano’s noir.

The seventh function of language by Laurent Binet is also post-modern fiction, and good fun to read, although it is clearly written for readers who are into literary criticism or linguistics. Among the characters, some top-notch linguists and semiologists, including Umberto Eco. It reads fast. I wrote something about it here ,  here  and  here, but this is a detour in fanfiction, of sorts

And Marx was silent in Darwin’s garden, by Ilona Jerger. I read this German novel in  Italian, so I can’t really judge the style. It is an intriguing story, that of the meeting of two great minds: Charles Darwin and Karl Marx, who did live in or near London for many years. In this fiction it is a doctor who makes them meet. Both famous thinkers are portrayed in a positive light, both manage to have a credible, if not fully developed – personality.

La vita quotidiana in Inghilterra ai tempi della Regina Vittoria (Everyday life in England in Queen Victoria’s times) by Jacques Chastenet (In an Italian translation). It is actually about the first years of Victoria’s reign; well researched and clear.

The Gods of the Germans, by Georges Dumezil (in Italian, too). This is a classic of the history of religions, one in a series of books Dumezil wrote on Indo-European religions. He underlines the similarities with other I-E cults and gods, for example the presence of couples of deities such as Hodor and Baldur, Freyr and Freya and, maybe, Nerthus, the mysterious goddes of the Anglo-Saxons, and Njord. It was an interesting read, even though I tend to believe, likeAntonia Byatt, that the meaning of the divine is metaphorical, not literal; maybe the most interesting part was about the meaning of Tig’s losing a hand to Fenrir: according to Dumezil, it was important to show that sometimes   even a  god may have  to break his word. The antinomy between duty and honour on one side, and necessity (although sometimes it was not practical necessity but the need to pursue fame, renown) is at the core of Germanic mythology and social interaction.

Ci sembrava di essere liberi,  (We felt free) by my friend and colleague Roberto Villa: a short book on free radios in our area (Bergamo, Lombardy) in the late 1960’s and 1970’s.

Tyrant: Shakespeare on politics, by Stephen Greenblatt. This was a bit disappointing, as essentially  it repeats what Ian Kott had stated in his Essay on Shakespeare with a few direct hint at contemporary politics. A good book, anyway, though not original.

Zero, by Charles Seife (in Italian). A popular-science work on zero and infinite in the history of mathematics.

The best was La musica nel tempo: una storia dei Beatles (Music in time: a story of the Beatles) by the historian Ferdinando Fasce. Fasce’s field of research is modern history, his books range from the history of trade unions to American presidents. He has a deep seated passion for the Beatles and at some point decided to research the history of the single most important pop group with the language and the approach of the historian. Therefore, even though I had read countless books on the Fab Four’s career, I had never read one which would weave it so carefully into the social and cultural context of England in the 1960’s. And even concerning the biographical account of the lives  of John, Paul George and Ringo I did learn things I didn’t know, like the relevance of Jane Asher’s family for Paul McCartney’s cultural development. It is a pity it is not translated in English. It is the perfect companion to Revolution in the head by Ian McDonald.