Another second-hand bookshop, one of those with the “honesty box” . It’s  the end of the holidays, we have bought a few books, so I only choose  two, and my husband, heroically, none. One is an essay, the other is one of those small, dark blue Oxford Classics: A book of narrative verse, compiled by V.H. Collins. This is the 1947 edition, but the anthology was published in 1930. Collins says in the Preface that the work had been started by Edward Thomas, and that he had finished the compilation with the help of the poet’s wife after his death in World War I. That it had a connection to a poet I  only discovered last year an whom I really admire makes the purchase of this volume – which I only saw at the last minute, something special. 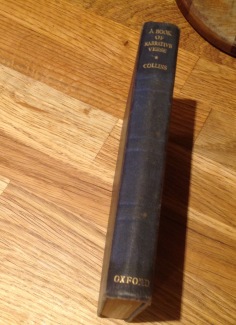 The volume’s own  story is summed up on the inside of the cover:the first five   owners, three of them writing the classes they were in, the fifth scribbling untidily.

It hasn’t got the dank  smell old books often have: it smells pleasantly of  smoke, maybe of wood but I may be romanticising a little what my nose perceives.

The volume contains passages from The Canterbury Tales, The Fairy Queen and Paradise Lost and several medieval ballads, but more than half the texts  are romantic or victorian. Some are classics, from The rape of the lock (not romantic, of course), Coleridge’s Rime to Keats’ The eve of St. Agnes  and the two Tennysons. Some I didn’t know, like Rossetti’s The white ship. I had no idea Rossetti had written narrative poetry on medieval history, but after all I am not an expert, I only love his sonnets to bits. That is one I hope to read soon – did  Rossetti believe the conspiracy theory on the disaster that started the Anarchy? – together with Stevenson’s Ticonderoga and the works of two poets I don’t know at all: The rider at the gate, by John Mansfield, and The Battle of Stamford Bridge by Laurence Binyon. The latter begins,

This could be good preparation before Vikings starts again in November. I will have to handle it with care, it is a little battered. I am really pleased with my purchase.

2 thoughts on “A book of storied verse”